A Segmented Approach to Recycling Education

OK, so hopefully you have read posts 1 and 2 of this series and re-evaluated your education program. You have sorted out your who, what, when, where, why, and hows. Now how do you deliver the message?

The best way to explain this is with some hunting references and analogies. For those of you who are opposed to hunting for food, before you start dusting off your old Ted Nugent hate mail to resend to me, and lest this content gets lost in any controversy about hunting, let’s assume I am talking about nature photography. The analogies work either way.

What are You After?

What is the goal of your education program? If you just say “I’m going hunting” and walk into the woods without any preparation or understanding about what you are after, the only thing you are likely to come back with is some combination of sore feet, dehydration, a rash, or lyme disease. Who is your target audience? What do you hope to accomplish with your education program? Do you have the right tools and approach to get what you need?

Unfortunately, an all too common approach to recycling and sustainability education is to broadcast a generic message as far and wide as possible. This is the equivalent of standing in an open field with a shotgun or telephoto lens, spinning around in a circle and shooting until you run out of ammo or film. On the positive side, you might get a target you would not otherwise have thought possible. Everyone hears the stories or has the stories (e.g. the one jock on a campus of 20,000 students who has never done anything environmental in their life but who “found religion” after going to a certain environmental event). But for the most part, this approach is a waste of film/ammo. Even in the above success-story, the status quo remains 99.995% unchanged. Those are good odds if you are talking about a soap’s capacity to kill germs. They are not good odds if you are talking about behavior change.

The other problem with the shotgun approach is that when you distribute a message that broadly, the message is typically so generic that the only people it has any impact on are people who are already receptive to that message. If your goal is only to reinforce existing behavior, that is one thing. But if your goal is to expand your program and to reach people who are not already participating, this is a waste of money. Shifting back to the hunting analogy, you can spend a lot of money to distribute duck lures all throughout an area and feel really good about your “hunting lure” coverage, but it doesn’t do you any good if you are trying to hunt deer.

As I have mentioned in other blogs, there is a full spectrum bell curve of participation. On one hand, there are a few people on one extreme who will do what you want them to no matter what. On the other, there are a few people who will not do what you want them to no matter what and who are not worth wasting effort on. If you want to affect mass scale behavior change, you need to focus on the remaining 90+ percent of your target audience are somewhere in the middle. Keep in mind though that the middle 90% are not uniform. That “middle block” is made up of a lot of little clusters and chunks and stray pieces. If you systematically tweak your approach and message to each cluster, pretty soon you can reach much more of that 90% than you initially thought possible.

Don’t be excited by behavior change, expect it. Approach your education program as a “gap analysis.” Assume that someone should be doing what you want them to be doing and work backwards. What is keeping them from doing it? Is it a lack of infrastructure, a lack of information, a lack of awareness, or just a little reinforcing nudge to get them to choose the right option? The answer is going to be different for each group of people. Change your tools accordingly. The stuff you need for duck hunting is different than the stuff you need for hunting elk.

Some people are never going to become environmentalists. The great thing about recycling is that they don’t have to be for recycling to work. All they have to do is throw their trash away into slightly different containers. A lot of things can get people to do that. If an environmental message doesn’t motivate them what will?

This is an area where dash-boarding really becomes valuable. Can you appeal to someone’s sense of campus pride or building pride if you cannot reach them through other messages? Whether it is an inter-hall comparison or an inter-school one, tapping into this competition can motivate different groups of people. Knowing how a rival school or rival dorm is doing at recycling can be very useful. I don’t care what rivalry you are looking at. It could be on-campus residence hall rivalries between East Hall and West Hall, sports rivalries like UNC-Duke, or rivalries that have both a sports and academic component like Harvard-Yale or Amherst-Williams. There are some rivalries so strong that people want to beat their rival at anything from football to tiddlywinks. Use that motivation to your advantage to improve your recycling program.

Are there sections of campus and portions of the campus community who are missing your recycling message because your message is targeted to a different ethnic group? For example, in your graduate student/married student housing areas you may have a number of international families. The member of the household who is here as a graduate student may speak/read English well, but his or her family members might not. Working with the housing staff in the graduate/married student housing areas may allow you to identify the most prevalent languages spoken by graduate student families and translate your posters accordingly. And just the fact that you took the time to identify their needs might win you some significant support among those families. You may also want to really look at your message. Are the cultures that you are trying to reach going to be in any way affected by your message? I saw a fascinating presentation by a longtime colleague Keefe Harrison a couple years ago regarding community based social marketing. I don’t want to do it an injustice by trying to sum it all up in just a sentence, but it was fascinating to see how everything from a “traditional” recycling message was wrong for reaching certain communities. Everything was wrong from the traditional nature scenes, to the traditional green and blue color schemes. Those traditional message elements had virtually no positive impact in certain communities. Having folks from those communities help to design the message led to very different but much more effective results in that community. A little bit of targeted outreach and a few minor changes to your message and you might be amazed at the results.

You don’t always have to do all of the heavy lifting. Partner with people who have a seemingly different message to send your message to a whole new group of people. Find your angle. Is another group talking about hunger? If so, it might be a good time for you to talk about ways to reduce food waste on campus or compost on campus. Is another group protesting and raising awareness about increases in student fees? If so, it might be a good time to look at messages that show how many students’ tuition go just to pay your school’s landfill bill. Is someone raising awareness about the need for jobs? If so, look to some of the various “jobs through recycling” publications that show how many more jobs are created through recycling than through landfilling. There are a lot of possibilities to re-target your message to people who might not be motivated by more traditional environmental and sustainability messaging.

A Picture is Worth a Thousand Words

It may be cliché, but a picture really is worth a thousand words. Incorporate pictures into your signs, labels, and promotional brochures wherever you can. It will convey your message far more effectively than words alone.

Take a look at an average college campus. Between words in a textbook, words in a paper/thesis, words in all the flyers and brochures, there are a lot of words. So much so, that words become “background noise” and are not paid attention to. Don’t let that happen with your recycling information.

Pictures are also critical to help reach members of the campus community for whom English is not their first language. They may be able to speak and read English, but it might be just enough of a struggle that it takes them a few extra moments to do so. The problem is that with trash and recycling bins, you typically only have a few seconds until someone puts something in the wrong bin.

Regardless of whether you are dealing with text fatigue or language barriers, having a picture conveys your message within the window of opportunity that you have in a way that words alone cannot.

Who are you trying to reach with your message? Have you targeted your message to all the different sections of campus? Or are you just standing in a field, scattering your message in all directions and hoping that it hits something? If the latter, do you have the budget and administrative support to keep doing that, or will you eventually have to have something to show for that effort?

Read Part 1 “Everything I need to know I learned from.. where?” 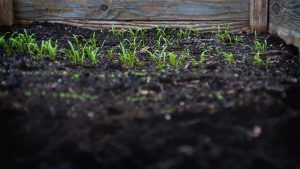